these are in reverse chronological orger starting with the most recent.  these first few photos were taken this morning.  joel and nicole have two cats – ninnymuggins and scribble.

they are both terrified of caleb.

so here is caleb and ninnymuggins having a special moment.  he picked up their snake/feather toy and started to wave it in front of her.  she couldn’t decide if she was frightened by his squeals or if she wanted to pounce on her toy!  caleb was GIGGLING and LAUGHING the entire time (which was only about a minute).  then ninnymuggins’ fear got the best of her and she lept off the chair.  i think it’s good progress. 🙂 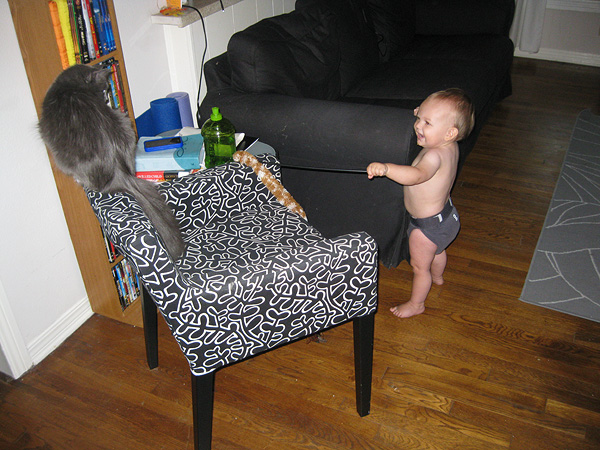 he’s not walking yet (he’ll be 14 months on tuesday!), but he is going EVERYWHERE!  he is all over this house!  his favorite thing to do is open all of our cupboards.  he usually just likes to open and close them…except for the one under the sink…he likes to take out all the bottles and play with the candles. 🙂

he’s wearing his little gpants (cloth diapers).  we’ve been using them for 6 weeks and i really like them!  dane is on board, too, since it will save us about $600 this year in diapers.  i’ll try to ‘review’ them soon. 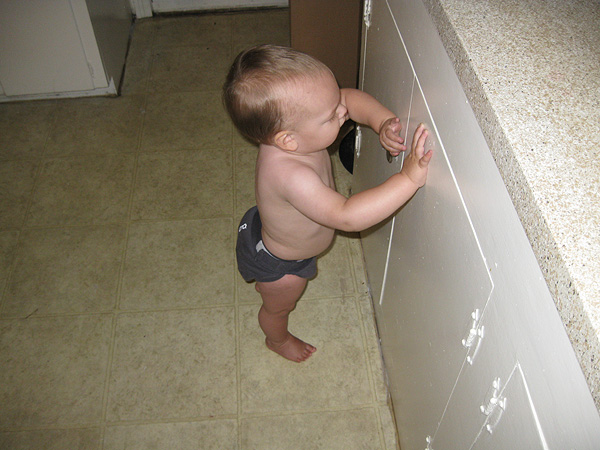 he is so tall!  i really wanted to get a picture of him by the trashcan.  he is tall enough to reach his hands up and open the top by pushing it down (it’s magnetic).  he will stand there and open and close the lid for 20 minutes.  thankfully, we empty the trash pretty regularly.

it’s a bit blurry, but i just loved his face in this one.  this was a few weeks ago when dad got home from work.

earlier that same day…LOVE THIS BOY!  you can almost see all of his teeth (8).

best smile ever…there he is again with that cat toy!

this was back in may. had a few friends over for a lil’ party.  love my man.

here’s my buddy, erin.  she’s moving in a few weeks to iowa. *sniff*  she’s awesome and i’m gonna miss her!

ok, i really need to take more pictures!  i’ve got the summer lazies.  i feel like it’s too hot to do anything but eat ice cream and take a nap (oddly enough, i haven’t done either one of those in a while!

One comment on “this and that from the point and shoot”